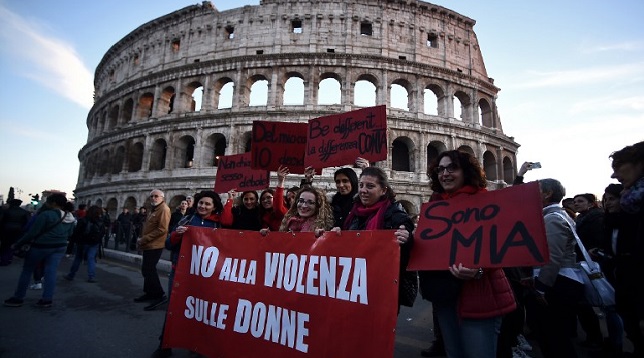 What women in Florence should know about domestic violence

On International Women’s Day (March 8), people around the world celebrate the social, economic, cultural and political achievements of women. But gender equality is still far from being reached and so many women, on a daily basis, seek help and support in handling and defending themselves from violence and abuse perpetrated by their partners. This is a reality for many women in Florence.
As a lawyer, I frequently meet women who are discreetly seeking legal advice on how to report their husbands’ behaviors to police, or from those who would like to file for separation without risking their safety, the safety of their children, and ultimately their permit to stay (“if I get separated, do I lose my permit to stay?”).

The legal tools for protection are in place. Whether or not they are always put into practice is another matter.

On March 3, the European Court of Human Rights levelled a judgment against Italy, in a case (Talpis v. Italy, application no. 41237/14) concerning domestic violence, where a mother of two (Elisaveta Talpis) repeatedly faced violence at the hand of her husband; ultimately, her son was killed by her husband as he attempted to protect his mother.

The European Court of Human Rights held that Italy violated both Article 3 of the Convention on Human Rights (prohibition of inhumane or degrading treatment), as it failed to protect Elisaveta Talpis against acts of domestic violence, and Article 14 (prohibition of discrimination) based on authorities’ failure to intervene. Their underestimation of the violence in question was ultimately held up as an endorsement of the behavior.

The court found, in particular, that by failing to take prompt action on the complaint lodged by Talpis, Italian judicial passivity created a situation of impunity that eased – and thereby allowed – the recurrence of the violence, which ultimately led to the attempted murder of Talpis and the death of her son.

Aside from this glaringly negative example of inefficient protection, in recent years, our lawmakers have made significant progress – at least on paper – in providing more effective protection to women, including in domestic violence cases. Until recently, the legal tools to protect a woman from persistent, verbally aggressive behaviors of ex-husbands, ex-partners, “obsessive” friends, colleagues and so forth were quite limited. Prior to 2009, stalking cases were punished through different circumstances, typified in the Penal Code, such as harassment, insult, private violence and injuries, but only if and when all the typical elements of such offenses could be proven. They were considered little more than “petty crimes”, an insult to the real damage that such behaviors can and do cause. In fact, in practical terms, most of the time the “stalking behavior” of the harasser looked different than the behaviors inherent to the other crimes, making it relatively easy for the accused person to be released from all charges or to get off simply by paying a fine.*

Most of the time, those being harassed had to wait until those behaviors escalated to explicit threats, or physical violence. But with decree n. 11/2009, article 612 bis was added to our Criminal code to cover the crime of stalking.

This allows for punishment of any conduct which disturbs someone’s routine living habits, causes a sense of anxiety or fear, creates serious mental or physical discomfort, or provokes a justifiable fear for one’s personal safety or the safety of a close relative. Theoretically, then, it is finally possible to stop stalkers before their  “obsessions” with the victims devolve into physical violence. The law requires the victim to report it to the police through a querela (complaint), within six months of the time the most recent offensive behavior took place. But in some specific cases, police can begin an investigation even without the report (ex officio).

Finally, internationally born women who have come to Italy to be with their partners have a protective tool at their disposal – the permit to stay for foreign victims of family violence, provided by art. 18 bis of the Immigration law.

The tool is not new – the law that brought about this permit dates back to 2013. But records show that it is hardly used and not well known.**

The law provides that the foreign-born victim of domestic violence in Italy – even one who does not have a valid permit to stay – can request a special permit to stay for humanitarian reasons, provided she reports her partner’s behavior and files for protection against abuse. She will then be able to file for separation, divorce or simply live outside their previously shared home without risking losing the document that allows her to remain in Italy.

This aims to encourage more foreign women to report such behaviors without being afraid of being banned from Italy. To obtain the permit, women must inform the police of her case of domestic violence or abuse, and authorities must conclude that the behaviors (such as family abuse and mistreatments, personal injury, kidnapping, sexual violence and stalking) are a concrete risk for the woman or for other members of her family.

The permit is granted by the immigration authorities, upon consent of the public prosecutor who is overseeing the individual woman’s case.

According to most of the women’s associations who have commented on this new law, this art.18bis does not offer sufficient protection for foreign women, since it still puts the onus on the woman to actively report the abuse or violence to the authorities. The majority of the time, these women do not dare report the actions of their partners because they are afraid of being banned from Italy.

As a lawyer, I stand by the importance of informing women (especially those who have arrived from countries where discourse on women’s rights is less prevalent) that they are not alone, that they must report any form of abusive behavior to the police, and that ultimately our country will protect them. The decision of the European Court of Human Rights shows that in Italy there is still a lot that needs to be done, because although the “legal tools” to offer proper protection and justice exist in theory, every day a new case of femicide is reported in the newspaper. At the same time, as a man, I realize that it is a duty for each one of us to educate younger generations, and men in general, to respect those who are more vulnerable, and all those who are different from us.

*The only case expressly covered by the law was “predatory phone behaviors” covered by art. 660 of the criminal code, which provided for a mere fine or a maximum of six months of jail.

**On the website of the women’s association “Donne in Rete contro la violenza”, it was reported that in 2015, two years after the enactment of the law, not even those who worked at the Courthouse of Milan and Rome in cases of female-targeted violence knew about this law.

Originally published by Michele Capecchi on The Florentine (http://www.theflorentine.net/art-culture/2017/03/italian-measures-protect-women/).