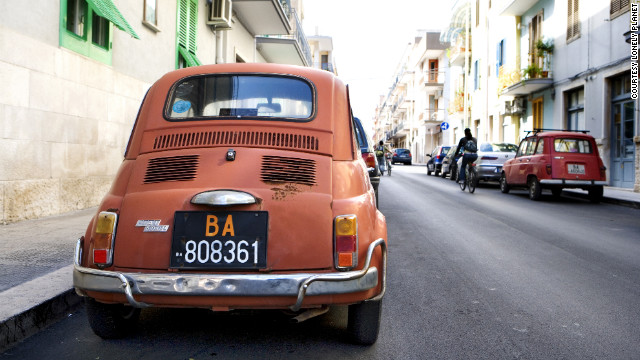 06 Feb So You Think You Can Drive

Some of my American friends who have now lived in Florence for over two years told me recently that they wanted to rent a car to travel across Italy and Europe during their holidays. Everybody dreams about getting into a nice sports car and driving up and down the Amalfi Coast or the Tuscan hills. However, if you are not just a tourist, and have legally resided in Italy for more than one year, it is very likely that your ‘foreign’ driver’s license is not a valid document to drive in Italy. So, my first question to my friends was, ‘Are you sure you can drive in Italy?’  ‘Of course!’ they laughed at me, reassuring me that they had rented cars many times in Europe, are proven drivers, have never had any problems, and had just renewed their international driving permits.

Not true! If you do not have a European Union (EU) driver’s license or if you have resided in Italy for more than one year, you are risking a lot by driving with your national (for instance, American) driver’s license.

In this respect, the Italian Driving Code (Codice della Strada, recently revised by the Law Decree n. 59 of April 18, 2011 pursuant the UE Directive 2006/126/CE, 2009/113/CE) distinguishes whether the driver has a driver’s license issued by another European country or not. If a driver holds a driver’s license issued by an EU country, he or she can continue driving in Italy with her national license.

However, for those who come from a country outside of the EU (‘a foreign State’), article 135 of the Driving Code says ‘drivers equipped with a driver’s license or an international permit issued by a foreign State can drive in Italy with his/her license, if those documents are valid, but only if he/she has not been a resident in Italy for more than one year.’

Therefore, if you are a tourist coming to Italy every now and then, perhaps just for the summer, you can continue renting all the cars you want; all that is required is your driver’s license and the International Driving Permit (certificato di guida internazionale), a document issued from your country (such as AAA in the United States and CAA in Canada). This allows you to drive in Italy and Europe for up to one year. In other words, temporary visitors, and those who have a valid license from another European country, do not have to worry about driving in Italy.

The real problem exists, however, for expats: those non-EU foreigners (Americans, Canadians, Brazilians, Australians, and so forth) who have lived in Italy for more than one year. After the first year of permanent residency in Italy, the International Driving Permit issued by your home country is no longer valid and you will need to get an Italian driver’s license to get behind the wheel.

How do I get an Italian driver’s license?

Those with a valid driver’s license issued by another EU country can continue driving vehicles with a valid license without needing to convert it after one year of residency in Italy. Nonetheless, it is still advisable to request the conversion or recognition of validity of their EU license, for example, to facilitate the procedures for renewal or duplicate their license in the event that it is lost or stolen.

Drivers of all other nationalities (or those who are not part of a diplomatic or consular family) cannot convert their driver’s license. The only possibility one has to continue driving in Italy is to take the Italian driving exam (a written test in Italian, with multiple choice questions; and a practical driving test, with an instructor and a manual car, thus with a stick shift!). And please note that you need to have a valid driver’s license to drive a scooter as well as one of those little electric cars that you see around Florence.

For this category of unlucky people who need to take the Italian driving exam, there are further restrictions. Even if you have driven for years and decide to get a brand new Italian driver’s license instead of converting your foreign license, according to Italian law you are considered a neopatentato, a newly licensed driver. Which means that during the first three years after obtaining the ‘B’ driver’s license required to drive a car, the driver must respect lower speed limits (100 km/h on the highways and 90 km/h on the motorways) and cannot drive cars whose engine power is above 55 Kw/t, such as a big SUV, according to art. 117 of the new Driving Code.

What are the risks and consequences of driving without a valid driver’s license?

Article 136 of the street code provides that after the first year of residency, if you are caught driving with only your national driver’s license (i.e., without an Italian one) the penalties are the same as those for driving with an expired Italian driver’s license: a fine of 159 to 639 euro, as well as the additional sanction stating that the police are authorized to seize your national license.

In such a case, even if the car’s insurance company pays all the damages, it is very likely (unless otherwise provided by the insurance contract; see box) that it will have the right to recover (diritto di rivalsa) all the money from the owner of the car and the (illegal) driver. Do you really want to risk that much?

Can I extend or renew my International Driving Permit?

In a word, NO! Extending or renewing the International Driving Permit will not help you get around the law.

My advice to my expat friends was that next time they planned to drive a car in Italy, they should not assume that they can drive just because they have done it all their life. If you plan to live and drive in Italy and Europe, take into serious consideration the idea of stopping by one of the many scuola guida (driving schools) in town. Or call your local Motorizzazione Civile (Municipal Department of Motor Vehicles), where it is possible to take the driving exam as a privatista, to avoid some of the expenses of a driving school. Ask whether you need to convert your driving license or apply for a new one.

After all, if you are an expat and you plan to explore this wonderful country, you have two options: use public transportation or get a European driver’s license!

So, fasten your seatbelts and … buon viaggio!

ENSURE THE INSURANCE: It is important to be absolutely certain that the insurance contract of the car you are planning to drive includes a clause that protects the owner and the driver from the insurance company’s ‘right of recovery.’ In this respect, the contract should contain a clause (rinuncia al diritto di rivalsa), in which the company expressly waives its right of recovery. In such a case, the insurance company would not be allowed to recover the money from the person who is responsible for the accident, regardless of the validity of the driving license.

Originally published by Michele Capecchi on The Florentine (http://www.theflorentine.net/lifestyle/2011/09/so-you-think-you-can-drive/).